While the United States has more millionaires than any other country in the world, Australia has the greatest median wealth per head, significantly ahead of the millionaire-rich US.

Despite this, Australians also experience higher than average levels of relative poverty in retirement (figure two). This begs the question…how can a wealthy nation with broadly distributed wealth fail to deliver adequate retirement outcomes for so many of its retired citizens?

The percentage of 65 years plus experiencing relative poverty in retirement

The answer? For many older Australians, the majority of their wealth is tied up in their family home. Although 80% of Australians own their own home at retirement and share a strong desire to remain at home throughout retirement, our national economic system has failed to provide adequate access to home equity wealth to improve retirement funding.

Currently, retirees have no ability to transform the adequacy of their retirement resources to responsibly access their accumulated wealth throughout retirement. To do that, we need to consider ways to provide access to the largest pool of savings for most Australian retirees – their own home equity. While superannuation alone is inadequate, most Australians have sufficient total resources to support high quality, in-home living throughout 25+ years of retirement. Traditionally, Australia’s retirement income policy has been framed as having three pillars: superannuation, non-superannuation savings and the age pension. Now is the time to include the fourth, and largest, pillar of retirement funding: home equity.

As detailed in figure four, 75% of older Australians face income inadequacy or uncertainty, undermining both confidence and wellbeing throughout retirement. The combination of inadequate and uncertain retirement funding leads to a gap in retirement incomes. 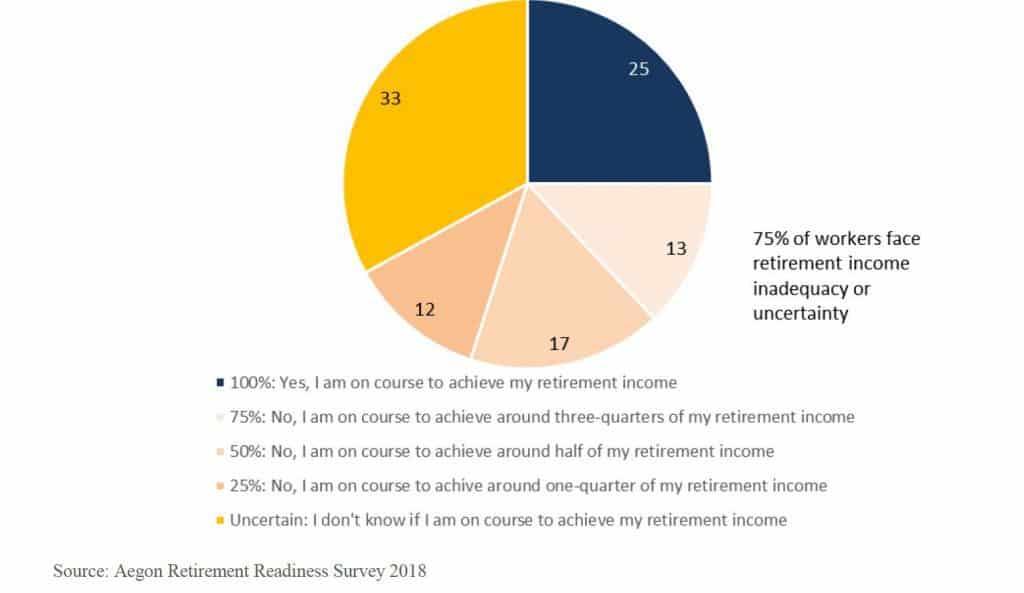 A key recent change in national policy on ageing has been the switch from viewing longevity as a “grey tsunami” and “budget threat” to celebrating an historically unprecedented new phase of life as part of “longevity and positive ageing”. To take advantage of 30 years of retirement, we must address social and economic policy. First, in social policy, healthcare and community connectedness are essential to retirement outcomes. Retirees with greater incomes and more confidence in their ability to fund retirement will be more active, healthier, and happier. Second, in economic policy, appropriate housing (including aged care) and funding for retirement are essential. Australian retirees intend to live long, healthy lives at home. Household Capital’s mission is to provide widely available solutions for retirement housing and funding by providing a universal finance function between housing and retirement. Australian retirees have saved more than one trillion dollars in home equity and should be able to draw on those savings to Live Well At Home.

The Retirement Income Review was released by the Australian government in July 2020. The report provides an overview of Australia’s current...

For most of us, 2020 has not been what we expected. Many resolutions made at the commencement of this new decade fallen by the wayside. At a...

Retirees left struggling with a drop in investment income as a result of Covid-19 but reluctant to draw down on superannuation have a new option...

If you’re worried about your super in these turbulent times, it might be time to take another look at the third pillar of retirement funding...

Will medical expenses derail your retirement?

Much has been written about Australian retirees being too conservative with their spending, particularly in the early years of retirement.

There’s been a body of research and a number of articles to suggest retirees are too conservative with their spending, particularly in the...

Building quality of life: The 5 secrets to a happy retirement

Entering retirement is, for the most part, an exciting journey full of new possibilities and adventures but at the same time the transition from...

When interest rates fall, it’s generally reported as a good thing. All those homeowners getting a break on their mortgage, the money freed...

While the United States has more millionaires than any other country in the world, Australia has the greatest median wealth per head, significantly...

Australians are experiencing a major societal transformation as the baby boomers, around 5.5 million people born between 1946 and 1964, are reaching...