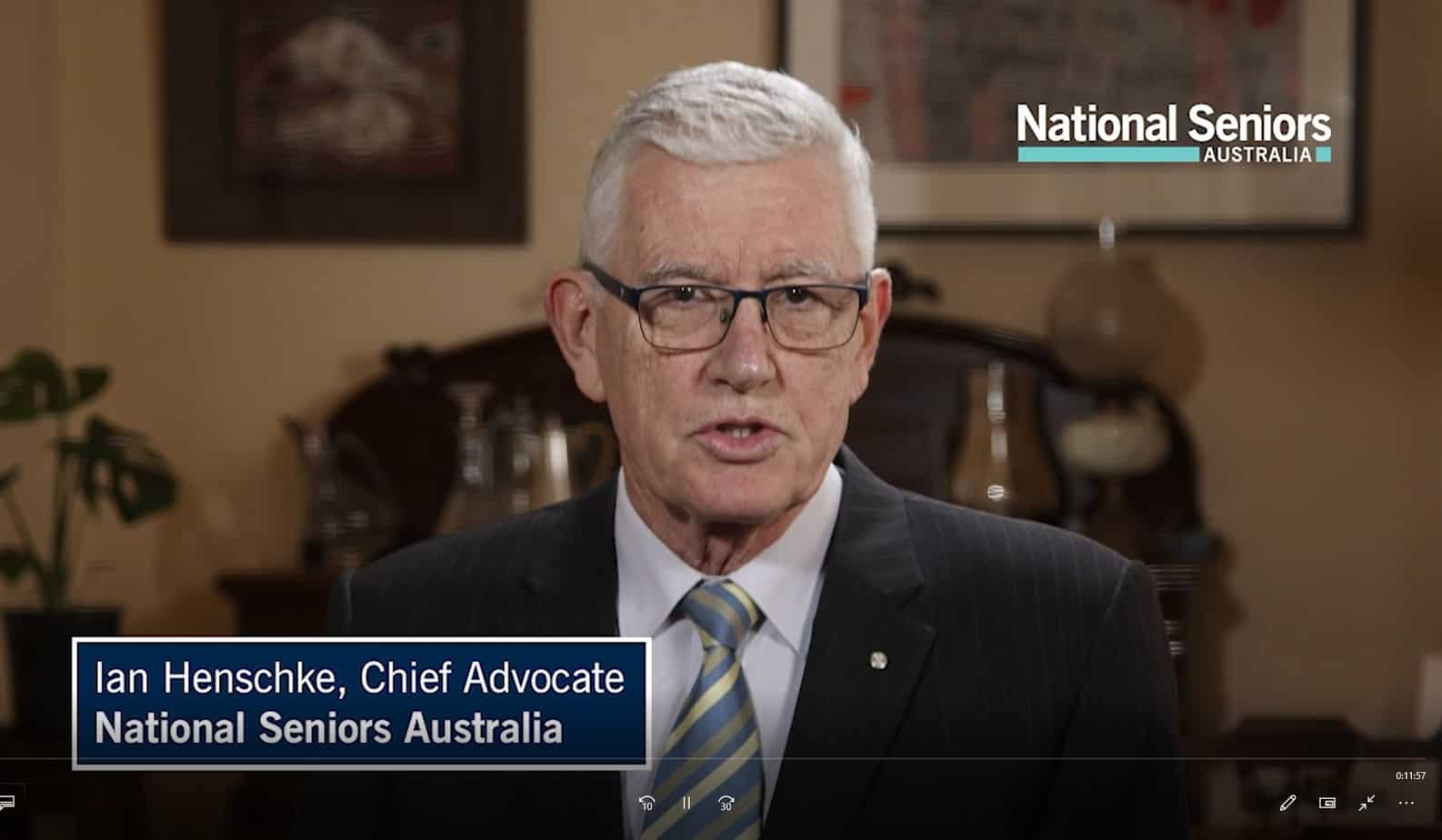 Hello. I'm Ian Henschke, the Chief Advocate with National Seniors Australia. And due to COVID travel restrictions, I'm talking to you today from Adelaide. And first up, I'd like to pay my respects to the Kaurna people, the traditional custodians whose ancestral lands I'm talking to you from today. And I'd like to acknowledge the deep feelings of attachment and relationship of the Kaurna people to country and respect and value their past, present and ongoing connection to the land and their cultural beliefs.

Secondly, I'd like to thank Household Capital and their CEO, Josh Funder, for asking me to talk today and inviting me to participate in the 2020 Third Pillar Forum on retirement funding, housing and care in aging in Australia. Well, National Seniors like Household Capital recognises the crucial role of home equity as a key component of our national retirement funding strategy. Now, home ownership is the fundamental foundation of a comfortable retirement, and lack of home ownership is the perfect predictor of pension poverty.

Now, we're told approximately $1 trillion dollars of home equity is now owned by Australian retirees. There are around 4 million of them and three-quarters of them own their own home. Now, I've been asked today to give you some of the strategic views on the impacts of the Aged Care Royal Commission on retirement housing, care and funding, both at home and in residential care.

So let's start with the Royal Commission. The Royal Commission kicked off about two years ago in effect, and from day one, National Seniors was there. And the very first thing we said on day one was that we had to improve the Home Care waitlist. At that stage, there are 128,000 people waiting for Home Care, and one of those people was in fact, my sister-in-law. My brother and sister-in-law were waiting for a Home Care Package, it finally came one year after Lorena had died.

Now, that is the situation that was put to the Royal Commission. Not just that case that affected me personally, but hundreds, thousands of other cases were put to the Royal Commission. And the Royal Commissioner himself, in the findings that he made just before he died, and that's Justice Richard Tracey, he said that the Aged Care system was neglectful. In fact, he entitled the report "Neglect." So Australia is now confronted with something that I think is a shame on this country. It is a great shame that we have almost 100,000 people still, now, two years on, waiting for a Home Care Package.

Now, we know that in the Royal Commission, we heard that 30,000 people in one year either went into aged care unnecessarily. In other words, they didn't want to go into aged care, or they died waiting for a package. So that's the situation. If the government were to improve the situation, they would have to provide, at a bare minimum, around 30,000 Home Care packages. Now, 30,000 packages at $50,000 is roughly $1.5 billion. They could make that available and that would get rid of those level four waiting lists. These are the people that are just on the cusp of going into aged care.

This ties in also with the ability to own your home or not. Now, if you think about it, I'm talking to you from my mother's home today. We ended up buying this particular house. My mother stayed in this home right up until the day she died at 87 and three quarters. Now, she had that as a foundation. She had no superannuation because she was a working mother in a house but didn't have a job during her life that paid superannuation, so she was typical of the previous generation. And my father had some superannuation because he worked for a bank. But they were typical of the previous generation. Their wealth was tied up in the house. Now, my mother didn't know about the pension loan scheme or reverse mortgages or any of these sorts of things, and she would eat no-name brand sardines because she was worried about how much money she would have. She didn't realise, that when she died, she was almost a millionaire. This house was worth over $800,000.

So, older Australians often don't recognise that they have this wealth in the house. And also, she wanted to keep the house for her children. She had one child who had a mental disability, and therefore, she was very concerned about making sure that the children were looked after. So I think you've got to remember that these aren't policy issues that we're talking about. These are life stories. We are talking about people that either own a home, what happened in their life, whether they have superannuation, all of that. And yet, government says to us, "Can you provide a submission to the Royal Commission? Can you provide a submission to retirement income review?" And we're supposed to talk about these things as if they are facts on a piece of paper. They're not. They're people's lives. They're my sister-in-law who didn't get the Aged Care package who died. They're my mother who died in this home and did get home help. And I'll go back to that. She got support through a program which was called the Commonwealth Home Support Programme. And it would be a few hours that would come in each week, a carer would come in for a few hours each week, and this actually made the difference between her being able to cope on her own and then the family came in and supported her.

So what we should recognise is that that is what older Australians want. That's what they want. They don't wanna go into aged care. She was actually asked about going to aged care, and I still remember this extraordinary day where there was a woman saying to her, "Look, Mrs. Henschke, all we're doing is putting your name down on the list." "Sorry, dear. I can't quite... What are you actually saying?" "What we're doing is putting you down." She said, "If it's come to that, I'm out of here."

Now, my mother died about a week later. Now, I still think to this day that she would rather have died than go into aged care. And you hear people say that. We can talk about how good the care is in some places, that's fine. That's what people want, but if you ask the average Australian today, what do they want, they want to stay in their home, they don't want to go into an Aged Care home.

Now, there will be situations where people have to go into care because they simply haven't got the support around them or they haven't got the Home Care Package, but I think it's up to government to provide enough support to support the carers, to keep everyone who wants to stay in their home, in their home. I spoke the other day to a gentleman who's worked in this area for 30 or 40 years, I think 40 years in aged care, and he said that he estimates that around one in five people who are in aged care at the moment could be in their own home and should be in their own home.

Now, if you think about that, you would say, "Well, where does Australia sit in terms of the world, in terms of the way we do aged care?" Well, the OECD have published figures that show that Australia, if there was such a thing as a residential care Olympics, for example, we would get the bronze medal, because the country with the highest amount of institutionalised care is Portugal, the next one is Estonia, and then it comes to Australia. At the other end, right down the other end of the scale is Israel, which has the lowest amount of institutionalised aged care and the highest amount of home care. Now, Australia would be a wealthier country than Israel, we would be able to do as well as Israel, so why don't we aim to be the best in the world at keeping people in their own home? That is something we have to think about, and that's something that I think the Aged Care Royal Commission has turned its attention to.

Part of that ability to stay in your own home may well be that you have to draw on some of the equity that you've got through your house. Now, there are opportunities at the moment, for example, if you had a level four package. And let's just take an example of a couple where one person has some degree of dementia, they're getting a level four package; another person needs some care and they're getting a level two package. Let's just call them Bill and Eva. And Bill and Eva are living in their own home. Their home is worth around $800,000 like this one. They're getting a package, and the package is a level four and level two. If you then top that package up with a little bit of extra care, they would be able to draw more care than they would get in Aged Care because the Royal Commission found that on average, people are getting around three hours of care a day in Aged Care. A couple living in their own home, you put those two packages together, you top it up with probably around $15,000 or $16,000 worth of extra care that they buy in, and they can get about four hours of care a day. So think about that, you would actually get 25% more care in your own home, staying in your own home.

Now, that's the vision that I have. My vision for the future is that everybody that wants aged care, who needs it, should be able to get it in a timely manner, and we've said that to the Royal Commission. So I think these are some of the challenges that face Australians in the future. We have to work out how we can become the country that's doing the best in terms of home care, not the highest level of institutional care, 'cause that's where we are at the moment. We're right at that end of the scale.

Now, another thing I just want to say, and I know that I'm running out of time, is that we know that around 80% of 80-year-olds own their own home, so that means that there is the capacity there to be able to draw on that income, draw on that equity as income, and perhaps pay a bit more. National Seniors has surveyed its members and they have actually found that they will all say that they're quite happy to pay a bit more if they get better care. So I think that's something that we should be looking at, and government should not be frightened of that.

So Australia has a couple of key issues to look at going forward, and they are, how are we going to deal with pension poverty, particularly older women. And we also have to look at how we're going to encourage people to stay in their own home and support them to do that and support the carers. I know there's a lot there that I've said. I know that I've just about run out of time, so I'll say thank you for your time, and I'll get out of your way.