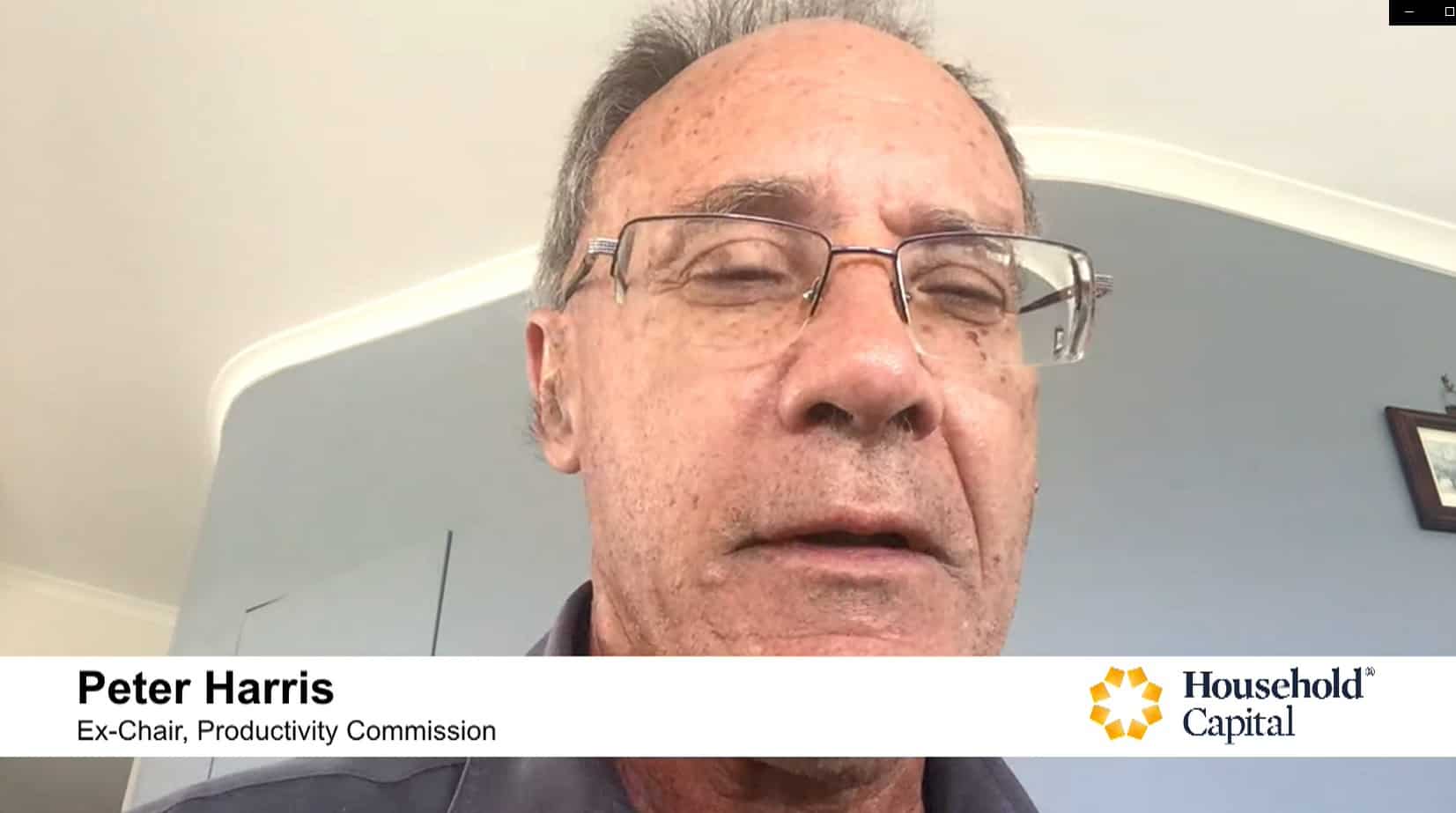 The Value of the Home in Retirement

Shelley Wettenhall: I'm delighted to introduce and welcome Peter Harris to our Third Pillar Forum today. Peter is an economist with extensive experience in Australian policy, public service and business. Most recently, Peter was the chairman of the Productivity Commission and was instrumental in the research, recommendations and reports that covered retirement and superannuation issues. Peter served as a senior private secretary to the Australian Prime Minister, Bob Hawke. He also held senior positions in both government and private businesses. Welcome, Peter, it's a pleasure to have you here today.

Peter Harris: Thanks very much, happy to be here.

Josh Funder: Peter, you've been a long-term passionate advocate of the role of housing and the home in retirement outcomes, and as chair of the Productivity Commission, led the writing of that report, the Housing Decisions of Older Australians. Where have we got to since then, and what's the outlook for Australian retirees in funding their retirement and having a roof over their head right through retirement?

Well, I don't think we have moved on terribly in terms of public policy since that December 2015 report. I should put it in context, the Productivity Commission wasn't just looking at the housing needs of older Australians. We looked at housing broadly as an issue because it seemed to us to be one of those coming pieces of public policy yet to be in a crisis situation. But with an aging population, and with increasing amounts of wealth tied up in housing, and with the cost of housing being reflected in both the rise of what the economist has called, "Generation Rent," and what individuals have found has been a more and more expensive proposition buying into the housing market, the Productivity Commission looked at a whole bunch of different housing issues.

This housing issue for people in retirement is particularly pernicious because it's a natural thing for people to be risk averse when they retire and not to want to enter into any situation of debt. But in that report, we did a highly effective piece of research, and it was research designed by the Productivity Commission ourselves rather than research designed by a company specialising in that, because we wanted to find out for sure what the attitudes of individuals were towards realizing on that kind of fixed wealth, that increases income throughout the years of retirement. And what we found in particular was people's reluctance to enter into any form of debt extended as far as not even being prepared to enter into debt to look after their health. 60% of Australian said, they simply wouldn't realize on any of that value of asset, not withstanding the fact that that asset is heavily appreciating. And we thought that was a really interesting conundrum and one in which public policy and private investment probably needed to do something to assist people in making those sorts of decisions in both their own interests.

That is, they will be more comfortable in retirement if they can access health or renovations within the house, but also, frankly it's got some benefit for the economy itself. Because putting off that consumption reduces employment and effectively doesn't even translate necessarily into a deferred kind of investment later on when people inherit that wealth, because the kind of people that are inheriting that wealth nowadays are people like me. We're over 65, we're inheriting from our parents, but we don't need the money either so we're saving it. And so this amount of money is tied up as perpetual saving, whereas with the right kind of information, individuals can make decisions and they can have the choice, they don't have to do it, but they can access some of that wealth under their feet, as it were, accumulating in their housing asset.

Josh Funder: Peter, some of the conversations that we've had as part of this forum have recognized exactly that conundrum that you've put out. That report and research that the Productivity Commission did was during 2015, only three years after the legislation that applied to equity released across Australia was transformed. And prior to that, I think our situation here, but also around the world, forced retirees to make a decision about the home or the house as an asset. Because mortgages in that situation, the traditional bank reverse mortgages, were a recourse, you could get evicted and you could owe more than the value of your home. So I think some things have changed since then, both in terms of the impact of that legislation, but also the needs of retirees and their children.

Peter Harris: I think that...

Josh Funder: So I think we're seeing the starting point of people saying that the family home is both housing and funding. It can be both, you can't take either of them away, and it can also be a living bequest rather than an unavailable asset and then a bequest. So that's changing but too slow perhaps to meet the broader needs of Australian retirees. How do we accelerate people making decisions that are right for them in their housing, their funding and for their children? How do we get that message across that's the outcome of your research and changes in the approaches to this sector?

Peter Harris: Well, every economist will tell you it all comes down to the same question for most of poorly addressed pieces of public policy, and that is a failure to inform, a failure to see information effectively translated into the marketplace and give people the chance to make decisions in their own interests like this. And we will have to do this with an aging population because people increasingly, and the COVID crisis is only going to add to this, increasingly will wish to age at home rather than commit to residential aged care, which means they will need to find what I might call a capital investment to be able to do that. Government public policy will support them doing this via way of services provision through My Aged Care, but the kind of capital conversions that you might need to age at home, this will require you to find money, and the housing asset is one of them.

The particular thing, as I say, is information provision. I'd really like to see a sort of concerted effort made between public authorities and private wealth advisors to be able to inform individuals that this is now a safe option. It's not an obligatory option and people should have the choice, no reason you need to realise on that housing asset or some part of that housing asset if you don't want to, but you need to know that the option is available, and I think the information provision has been still fairly weak.

Shelley Wettenhall: I'd have to agree with you there, Peter. We have become real information disseminators of household capital. A lot of people do come to us with very little knowledge on how to fund these very big decisions that they're left to make. And information is key, and they are grappling as to where to find it. So it's interesting that you agree with us, it is a real conundrum as to which way they turn and how they source it all.

Peter Harris: And as I say, the pressure is going to be on, because an aging population, and again COVID has contributed to this, we'll be an older Australia as you just read in the budget papers in the future because migration is reduced and because of this natural inclination people will have not to necessarily move into aged care. So it is an increasing need that we will face, and it's in not just the public interest, it's in the private interest of those individuals that they're made aware of opportunities. Not required to take them, but made aware of them.

Shelley Wettenhall: Yeah, absolutely, and it will enable them to live well at home, making these big decisions and sourcing the capital that they do need. But I must agree with you, there's not many people jumping at the moment to get into aged care and that's for sure. Well, thank you very much.

Peter Harris: Yeah. And I think that will go on for a little while yet.

Shelley Wettenhall: Yes, I think you might be right. Well, thank you very much for your time today, Peter.

Shelley Wettenhall: And for your contribution to the Third Pillar Forum. Thank you.